Who Are the Highest Paid Athletes?

Professional athletes around the globe make an exorbitant amount of money, no surprise there. But you might be surprised by which athletes make the most, and just how much they take home at the end of the day! 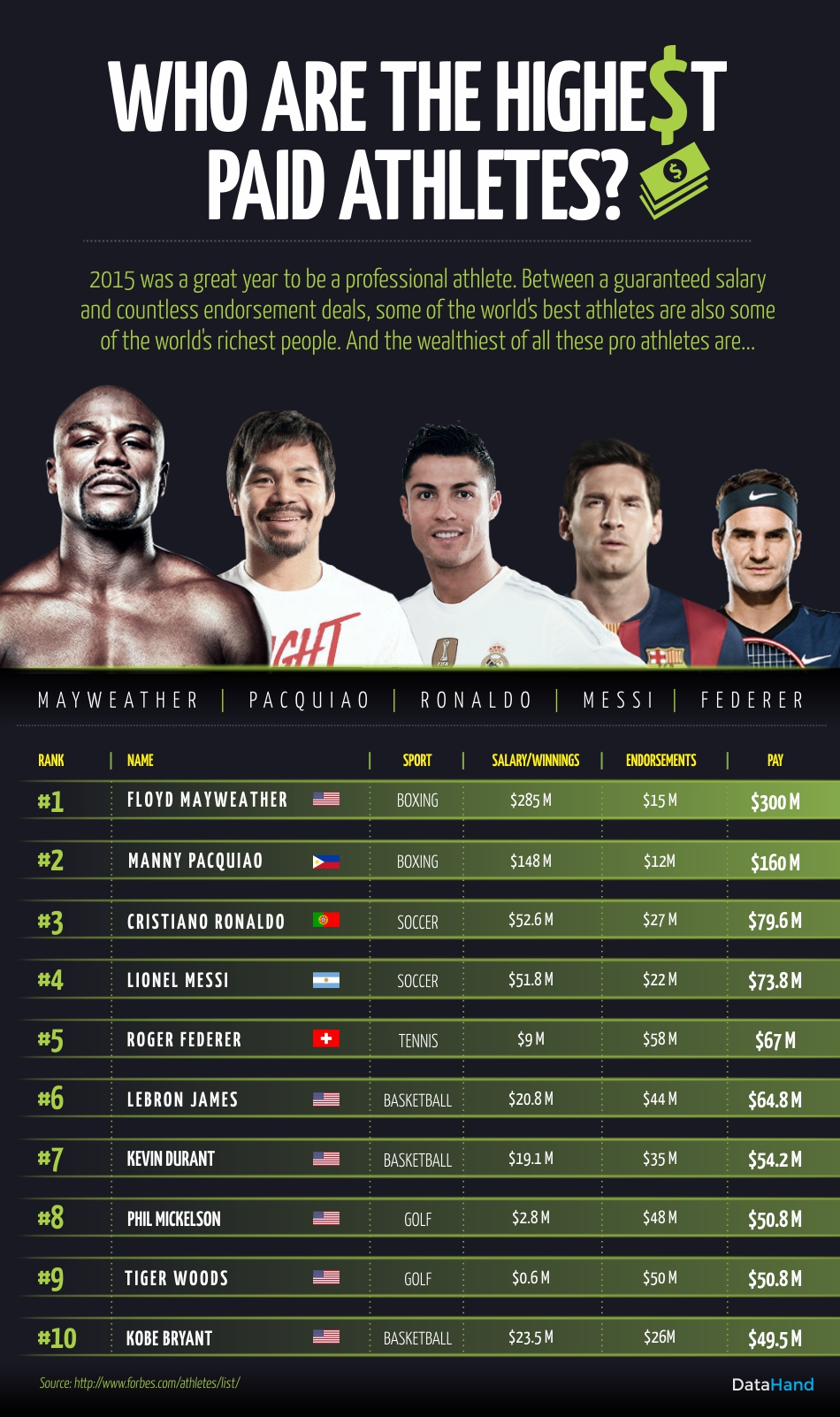 It’s a great time to be a professional athlete. Salaries are soaring and companies are making it rain in Endorsement-ville. Here are some of the top earners in a few of the most popular sports.

Floyd Mayweather topped the 2015 edition of Forbes’s list of the world’s highest paid athletes, raking in 300 million dollars from June 2014 to June 2015. And, judging by how he trains, he deserves every penny. He has a reputation for being a perfectionist (both inside and outside of the gym) and for following a grueling training schedule that almost anyone would consider extreme.

An interesting extra tidbit—the #2 spot on Forbes’s list belongs to another boxer, Manny Pacquiao, who earned 160 million dollars in 2015.

Salaries of the world’s top tennis players might not match up to athletes in other sports, Federer only pulled in a measly $9 million last year after all, but their endorsement deals easily make up for the loss.

Though he walked off the court in 2015 ranked second in the world, Roger Federer closed his 17th year of professional tennis with a staggering $58 million in endorsement deals from the likes of Nike, Rolex, and Credit Suisse.

Federer comes in at number 5 this year on the list of the world’s highest paid athletes and though he’s now a clear veteran of the game, there’s no sign that his backhand or his bank account will weaken any time soon.

Football, or soccer, is one of the most popular sports in the world, with millions of fans and millions of dollars at stake. Currently, the two highest-paid players are Cristiano Ronaldo from Real Madrid, who brings in $79.6 million when you combine his salary ($52.6 million) and endorsements ($27 million), and Lionel Messi from Barcelona who earns $73.8 million between his salary ($51.8 million) and endorsements ($22 million). Ronaldo and Messi also take the #3 and #4 spots, respectively, on the Forbes list of highest-paid athletes. Both athletes earn $10,000/minute of playing time, with both clocking in at around 5000 minutes of field time.

Ronaldo recently gave reporters fifteen of his health and fitness tips, which help explain why he has the body of a Greek god and the skillset of a superstar. For example, as a part of his training regimen, Ronaldo strictly adheres to a diet and exercise plan that involves going to bed early and getting up early, avoiding alcohol and sugary foods in favor of water, whole-grain carbs, and protein, and, of course, intense exercise sessions with plenty of cardio as often as possible.

Ready to Get in Shape?

So…yeah. It may still be a good idea to prioritize that academic scholarship over one for athletics.

recommended from the web

Netflix Lays Off Employees After A Substantial Subscriber Loss

Amazon to Charge US Sellers a 5% Inflation Surcharge